I Was Lost and Then I was Found….In Alaska. How Study and Work Abroad Can Help Shape Your Identity? 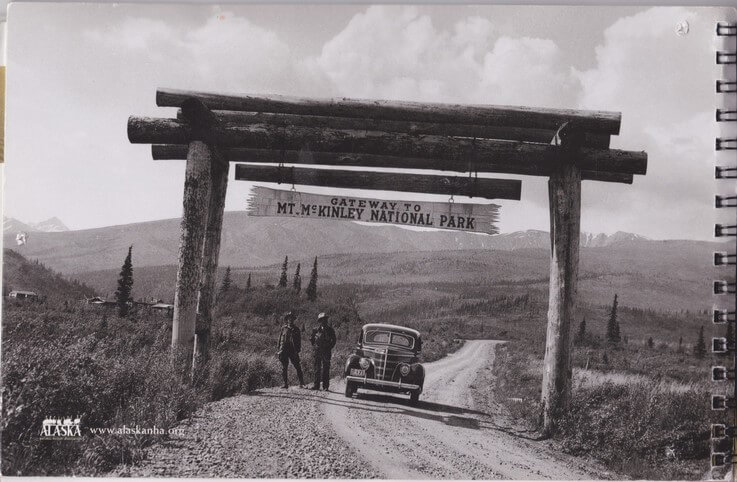 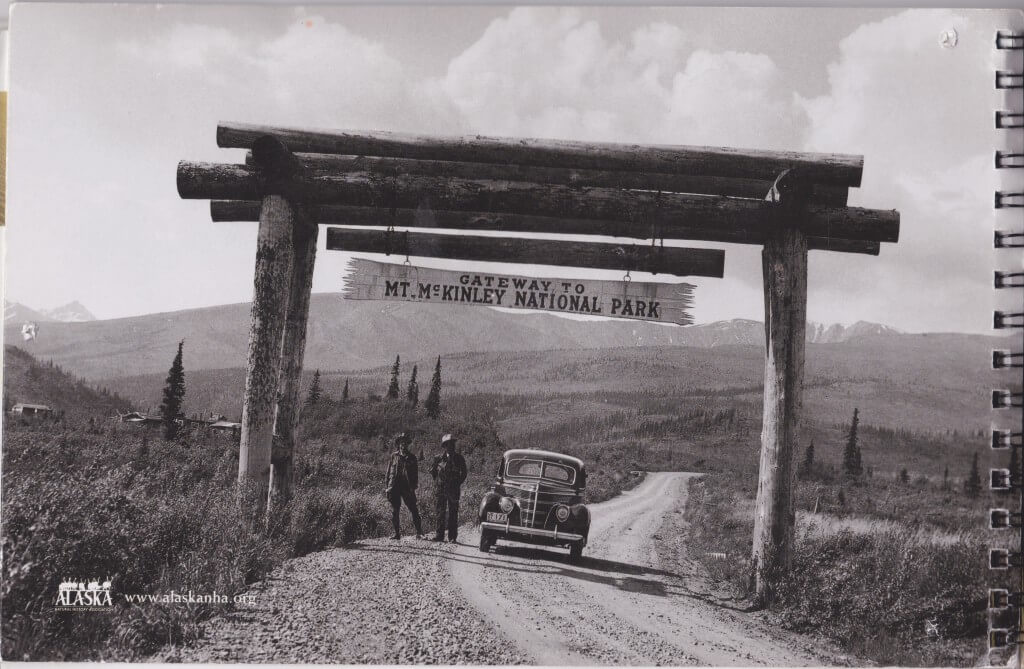 One of my bigger regrets from my school aged years is not doing study abroad in college. To be able to spend 4-6 months in another country, immersed in its culture, and with the likelihood to travel and explore the surrounding countries when not studying or in class, would have been the perfect opportunity for more adventure and growth.

But, I spent the beginning part of my University years lost and making many missteps along the way. If I had only been more deliberate with what I wanted, I might have had some grander opportunities, or if I had just held out on the status quo to figure out what I wanted, than I probably would have taken a gap year to expand my horizons and figure a thing or two out. But people weren’t doing that. I didn’t know you could do that.

Instead, it was off to a major University, thoughtlessly doing what everyone else was doing. Pretty immediately, I was sleeping through classes and eating way too much food on the dining plan (Freshman 30 anyone?). I was miserable. Depressed even.
Luckily, I had an Aunt who I adore who offered to take in a lost 19-year-old who was failing out of college.  I should have had my shit together at that point, but having the safety net of Mommy and Daddy, mistakes didn’t offer much of a fall.
But it was a good move.
Community College was right where I belonged. It was manageable. It was about my classes and learning. There wasn’t the hoo-ra-ra that comes along with an enormous State School. I was having enormous successes, but needed more. Cruising with my Grandparents at Age 5.

I did have that job within the Cruise Industry, which looking back from the age of 9, I may have manifested long ago.  Mrs. Meiklejohn had us draw a picture of our “Dream Job” in 3rd grade. I drew a picture of me standing in front of a giant cruise ship. I wish I still had that picture today, but I can remember it vividly in mind. That same Aunt that took me in had been long working for a large cruise line for my entire life. We even cruised  with my family for many years as our yearly vacation. I always dreamt of working for them too.
My job wasn’t on a ship, but at the airport meeting cruise-line passengers and putting them on buses to head for the port. I loved it, even my hideous  polyester uniform and all.
So, at this point I was finding my stride but kind of hating Florida at the same time. I could not imagine spending the summer in what already felt like the depths of hell, in January. I also didn’t want to go back home either. One of my bosses at the airport had a daughter my age (do I dare say we were kindred  F-ups, or maybe lost souls  would be a nicer version of the tale)  who had spent the summer before working in Alaska doing the same “Meet & Greeting” we did at the airport, but for train passengers. 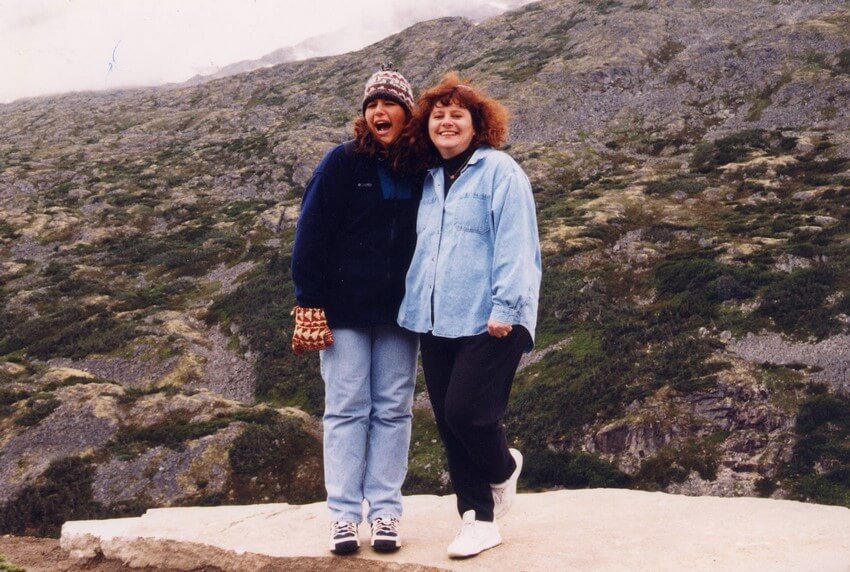 I had been to Alaska once on a cruise with my family at 17, and beyond the amazing natural beauty of “The Last Frontier” there were A LOT of HOT guys working there. As a 20-year-old boy-crazed girl, where did I sign-up? HERE in fact! I got the job! And few months later, I was off to Anchorage to start my training. I learned more working for Grayline Alaska than I did in all of college. It WAS my college, at least my A.A.. Waiting for cruise passengers as the McKinley Explorer arrives at the train depot.

My job was as a Customer Service and Sales Representative serving Cruise Passengers who were extending their sea voyage to the interior of Alaska via train. We lived in communal housing outside the gates of Denali National Park. We worked together, explored together and lived together. We were a diverse group in religion, geography, and upbringing – and in general we were all youthful. 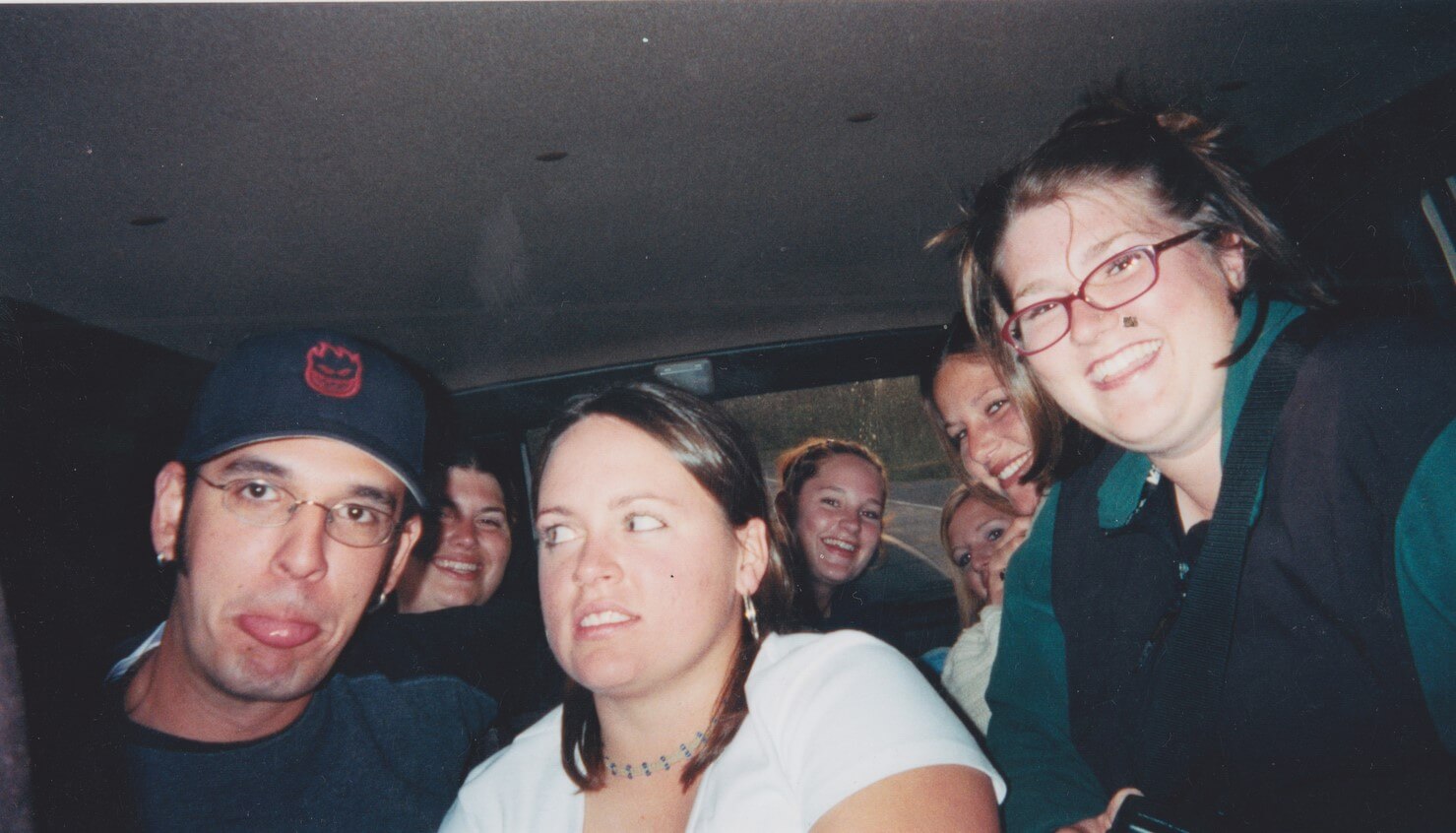 Co-workers riding to see Star Wars and get Thai Food in Fairbanks, Alaska

Everyday for 3 months we drove our van to the train depot just inside the National Park to meet and greet tourist, spending just a few days in Denali before finishing their vacation or heading out to the Inside Passage on their dream cruise. For many of our guests, this was a vacation of a lifetime. I was so happy to be a small part of it. Goofing off in the office of Grayline Alaska

For me, THIS was an experience of a lifetime. I consider myself to have a very “All American” middle class upbringing growing up in rural Maryland. Now, the Gateway to Mt. McKinley (the highest peak in the U.S.) was my backyard. It was 4 seasons in just under 4 months. A lot of camping, hiking, bonfires, wildlife, movies, laughs, and music. Camping next to a river in the Kenai Peninsula, Alaska.

I listened to country and classic rock prior to Alaska. Now Bright Eyes, Pinback, Badly Drawn Boy, and Modest Mouse were the soundtrack to my life. I learned to drive high mountain switchbacks in a 16 passenger van. We went white water rafting in a glacier fed river, flew in airplanes AND helicopters over glaciers and the back-country,  as well as horseback riding on mountain trails. The moose caused traffic jams, not commuters coming home from work at rush hour. What I wouldn’t give to sit at the Lynx Creek Pizza & Pub and have an Alaska Amber or a coffee on an early morning at Black Bear Coffee House?
Daylight was 24 hours and when dusk hit as the sun went behind the mountains, creating alpine glow at 2am, you thought the night was just beginning. The intense and wonderful relationships I made working there are ones that last a lifetime. By the way, I never met any special love interests, just a  lot of crushes, but the friendships,  I have maintained 13 years later, traveling to different parts of our country to continue adventures. These are the people who have inspired me to travel, who have helped me expand my horizons, and who have helped me embrace the “Me” that I was meant to be. 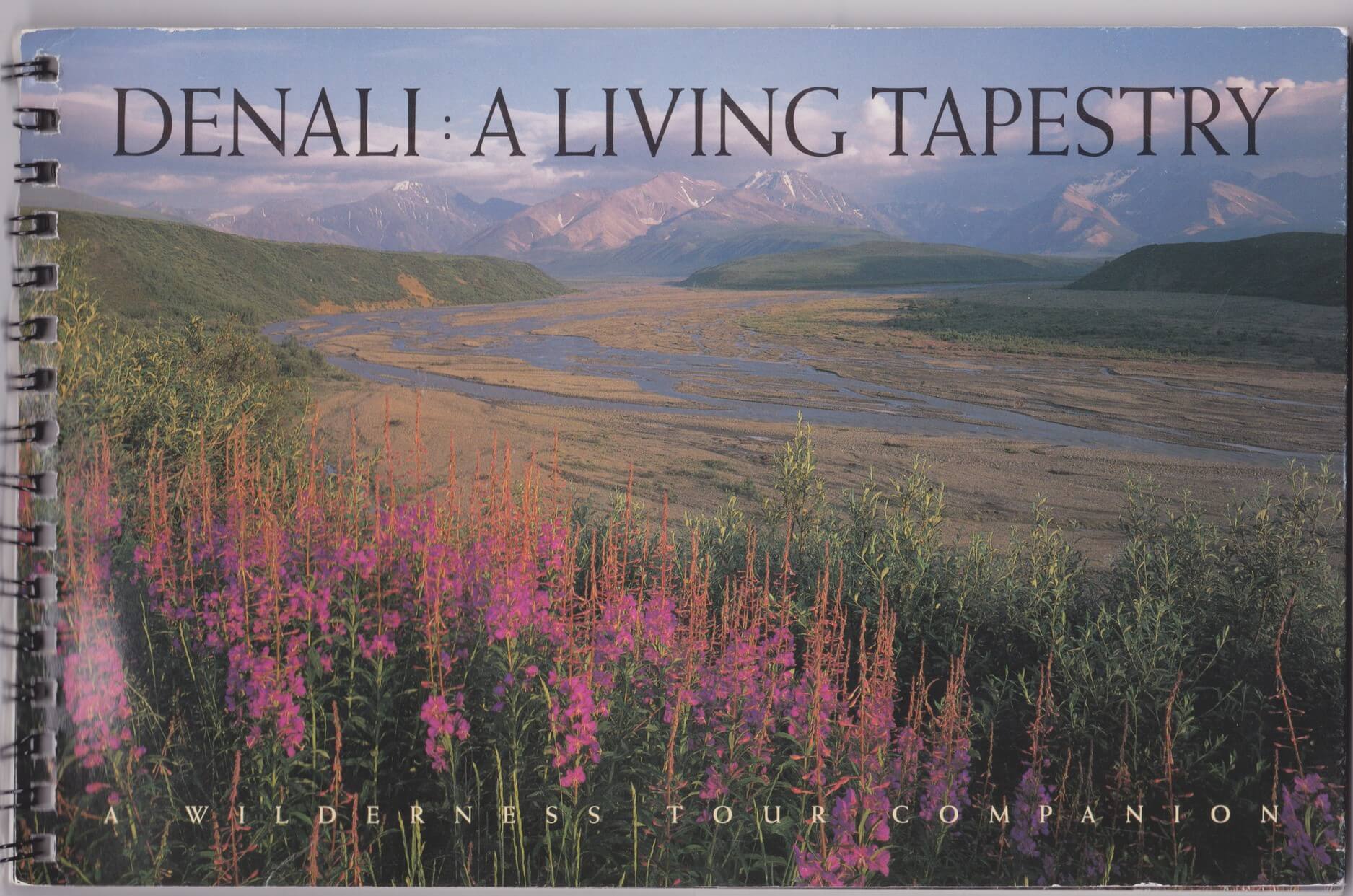 I guess the moral of the story or what I learned at that point in my life, is that sometimes your best education isn’t found in an institution. Don’t be afraid to go off the beaten path. Follow your gut AND your heart. Change can be a really good thing, even if its scary.
Now, plan a trip to Alaska! Or, encourage your child to study abroad! Take that trip of a lifetime! Travel can be inexpensive when done right (food and lodging was included with my Grayline job). So don’t let anything stand in the way of realizing or living your dreams.
#studyabroadbecause

9 Natural Tips to Boost Your Immune System (Especi...
Awesome Places to Eat in the Gatlinburg and Pigeon...
Tips for Tent Camping with a Toddler
Mount Airy’s Rails to Trail, A Perfect Hike ...